Myrina Tunberg divides her artistic activities between the development of individual projects and her curatorial practice. Greek by origin, she studied in San Francisco, and formed an integral part of the local art community actively participating by first founding a gallery and later working as an editor and a designer. This interest in the local translates in an art practice where investigation supersedes the context and the medium. Her projects include photography, video, text, collage and electronic media such as animated GIFs that are often designed to provoke unusual experiences in the public space. Within the framework of Myrina Tunberg’s residency in Barcelona, Homesession organised a talk in which she explained the main guidelines of her work. The Greek artist presented some of her more recent art investigations in the fields of video, software, multimedia technologies and sound. For her multimedia installations that involved an aspect of programming and in which sound and the digital image always play a very important role, Myrina lets herself be inspired by the context where the work is being developed. She was interested in entering into contact with creators and cultural agents around her and designing events in which art, music, technology can connect, a process that she has been developing in her own context since 2009 with the space Kitsch SF. 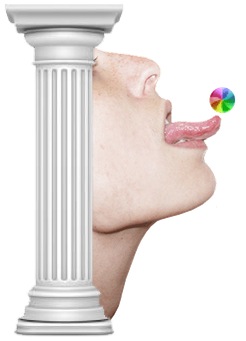