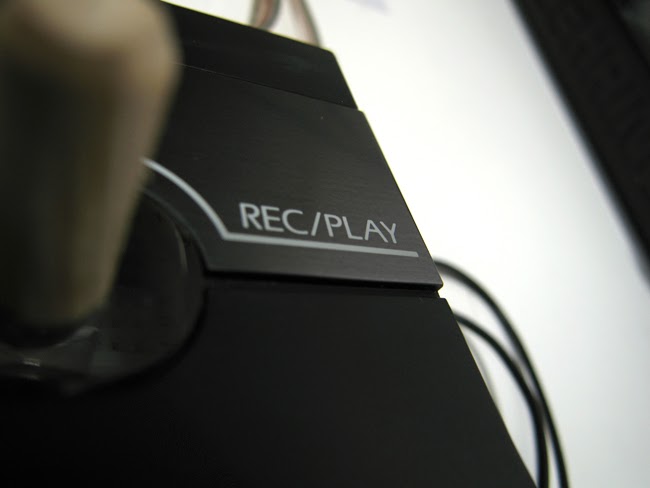 Homesession presents __REC/PLAY__, a project by resident artist <a href=”http://www.thessiamachado.com”>Thessia Machado</a>: REC/PLAY is an installation/instrument built of assorted components harvested from mostly obsolete technologies and toys. The core of the piece is a stripped down double cassete-deck with motor and spindle mechanism. Fabric belts fan out of the rotating spindles and into the space to activate an assortment of sound generating elements – rustling paper, ringing glass jars, tapped wood; teasing out from humble materials their inherent musicality.

Different sonic possibilities of this instrument will be explored in series of collaborative improvised performances with sound artists and experimental musicians.

Each performance will take place at 8pm and will last approx. 1/2 hour. You’re requested to be puntual. Limited capacity.

”BIO: Thessia Machado was born in Brazil and now lives and works in NY. Her work investigates the physicality of sound and its effect on our perception of space. In sculptures and interactive installations that have a real-time, live component, the expressive potential is still active and changeable. As a extension of this practice, and under the moniker “link”, she’s performs electronic and electro-acoustic experimental music with hand-made and modified instruments.”

”Thessia’s installations and video pieces have been exhibited in New York, London, Philadelphia, Paris, Amsterdam, Dublin, Berlin and Athens. She has been awarded residencies at Homesession, Barcelona, the NARS Foundation, NY, I-Park, MacDowell Colony, Yaddo, the Atlantic Center for the Arts, the Irish Museum of Modern Art and the Vermont Studio Center and is a recipient of fellowships from the New York Foundation for the Arts, The Experimental Television Center and The Bronx Museum.”