At first, I wrote a lot about Barcelona, ​​its architecture, its urban devices, as well as all the people I’ve met since I came here. These notes are the equivalent of a story or a postcard, becoming almost in a love letter to Barcelona. These texts and these notes have been interpreted and sung by a soundtrack that is configured as the Original Soundtrack of the exhibition created in collaboration with Natalia Paez Carrizo and music producer @hugodouster, here in Barcelona.

These pieces are both costume and scene representation of some of the purposes of the soundtrack. The whole exhibition can be seen as a visual and sound exploration of Barcelona, ​​a kind of itinerant opera karaoke. 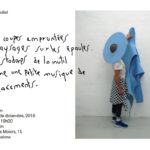